History of Education in Sacramento County

The 36-page softbound book is one in a series presented by the California Retired Teachers Association (CRTA), State Capital Division #5, covering Sacramento area educators and school history. It is the result of several years of work by members of the chapter's history committee. Under the leadership of past chairman J. Martin "Mike" Weber, committee members researched and synopsized the lives of the 19 county superintendents who served from 1853 to 2003. Staff of the Sacramento County Office of Education edited, designed, and printed the book.

The publication covers a span of 150 years commencing with Sacramento's first county superintendent of schools. It was planned in 2003 as a sesquicentennial tribute to the county's education leaders.

A few interesting facts uncovered include: 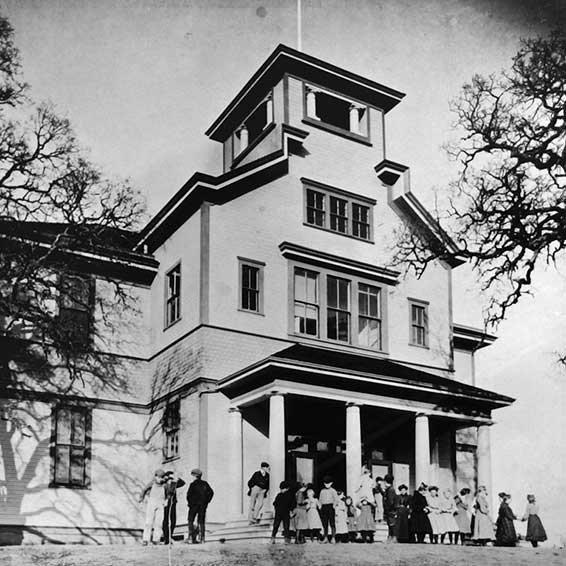 The 22 early Sacramento County schools displayed in this photo gallery are copies of photographs produced by Hodson's Photography Studio, which, in 1902, was located at 813 K Street in downtown Sacramento. Burton M. Hodson resided at 427 1/2 K Street. The studio later moved to 9th Street between J and K Streets and remained in business under various owners until about 1990.

The History Publications Committee of the State Capitol Division, California Retired Teachers Association (CRTA), studied the photographs thoroughly and concluded the exposures were made approximately in the year 1902. If you look carefully at one photograph, you will find a portable blackboard with the name of the school and the date, February 2, 1902. Can you find it?

Dick Rogers, retired Director of Instructional Material Services, Sacramento City Unified School District, found the original, rare photographic album in a storage closet at the district's previous headquarters, located at 16th and N Streets. The storage closet was in the office of Dr. Ed O'Reilly, who held the position of Deputy Superintendent.

The CRTA Committee determined that the photo album Dick Rogers found was probably the original copy of these unusual prints. The photographer likely made the 8" x 10" sample album with the hopes of selling the collection to interested individuals or schools. No duplicate set owned by individuals or local libraries has been found, so we are fortunate to be able to share this glimpse of Sacramento County Schools at the beginning of the twentieth century.